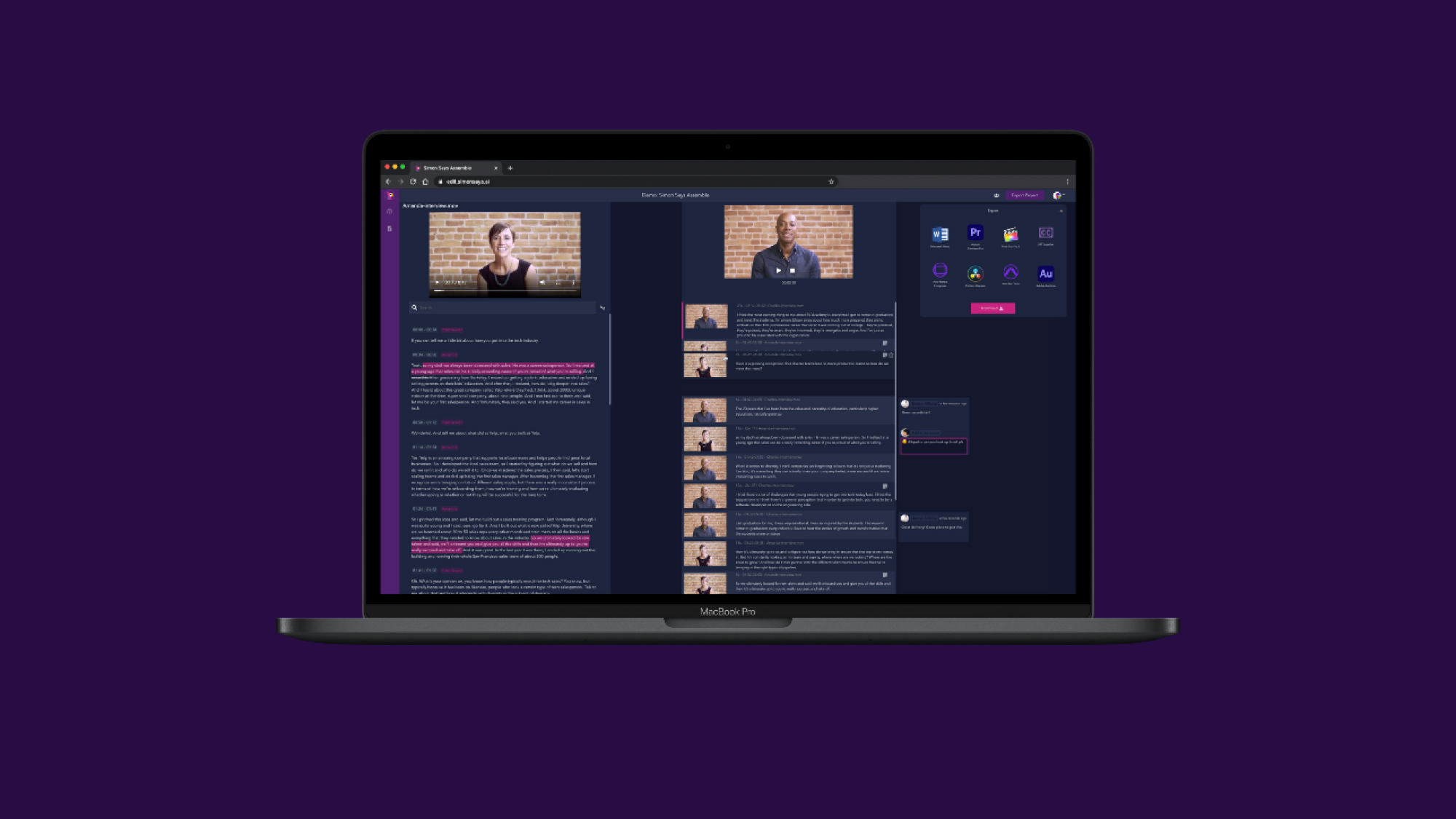 Sign up to Simon Says for free and try our newest product today: https://www.simonsays.ai

It all started with an idea. Gather the best and brightest in the company and interview each and every one. You‚Äôd bring their collective expertise together in a perfect union of artistry and call to action.

But that all seems like a pipe dream now, as you officially begin the seventh rough cut in as many days. The back-and-forth is sucking you dry, and you need to get everyone on the same page, literally in this case. And now Janet just emailed, something about the new version not aligning with her department‚Äôs mission. Fine, we‚Äôll use the other take, Janet. Is this better, Janet?

Sadly, all that remains of your editor is the shriveled husk of a once proud artist, fighting you at every turn for the last crumbs of creative expression; the very same crumbs you‚Äôre grasping for. As you rain blows upon him, you realize there has to be another way.

When it comes to creating a video, especially one with an excess of conversational content, simple ideas can turn into complex execution in the blink of an eye. The main thread of a story begins to unravel as it passes through each set of hands, and all of the steps you have to slog through each time a change is made, let‚Äôs be honest, tend to kill brain cells. And we thought drugs were bad.

No matter what level of production you‚Äôve been a part of, you‚Äôve run into the same issue at some point: lots of media to sift through with lots of hurdles standing in your way as the deadline creeps closer. In all the chaos producing a video, from simple remote Zoom website videos to large-scale corporate communiques handed down from on high, there‚Äôs a real need for a product that isn‚Äôt just a pretentions promise, but rather an effective tool that doesn‚Äôt rope you into its own version of how things should be done.

THE SOLUTION: Cut Out The Middle Man And Start Cutting!

Bonus points if you can read this next part in that Micro Machines voice. *takes deep breath*

Imagine a web-based interface that can read nearly any codec and media file type you can throw at it, that can transcribe with 95%+ accuracy in almost every language AND faster than real-time, and THEN allows your entire team to collaboratively start piecing together sequences of select moments in a simple and clean browser-based interface, that can further be previewed in real-time and exported out multiple ways for an editor, regardless of what software they use. Plus! It makes you an espresso while you wait.

Okay, so the espresso is a lie, but the rest? It‚Äôs called Simon Says Assemble, and it allows you to take selections of your media based on what‚Äôs spoken, assemble those selections how you want, share and revise with as many people as you want, and export it a variety of different ways, including most importantly as an XML for the edit.

Ever bought a tool designed for one specific thing? Like those wolverine claws meant to shred your crock-pot chicken? If you‚Äôre like me, you come away realizing you could just have easily used a couple forks and avoided a $25 Pampered Chef bill. Simon Says Assemble is the couple of forks. Like all great tools in the world, Simon Says Assemble gives you the ability to do many different things, without imposing a very specific set of circumstances for it to actually function. Simply put, anyone on your team, with no technical skills required (okay, maybe reading‚Ä¶ ), can start pulling selects and making assembly cuts from media with spoken language, all from the web.

Selects, stringouts, assemblies, paper cuts; these are all terms thrown around for a lot of different things, but here‚Äôs a quick refresher so we‚Äôre on the same page. Keep in mind, this terminology is fluid, so no nasty tweets or whatever y‚Äôall do because you‚Äôve heard different.

Building selects and assembly cuts have typically been the responsibility of the editor or assistant editor on a team. It requires access to professional software and expertise in operating that software. When it makes sense to stick with that process, don‚Äôt fix what isn‚Äôt broken. However, there are plenty of reasons why you would want or should offload this work to someone else, if you have the ability.

Journalists: AI will start cutting videos without human involvement, putting editors out of a job!

Finally, someone figured out a good use for AI, beyond the whole dog ears selfie thing: mundane tasks. And at this point dictation is about as mundane as it gets. Simon Says Assemble builds on the amazingly valuable Simon Says AI transcription engine. This crazy smart tool transcribes all spoken language in a clip, assigning every word with in and out source timecode, forming the backbone of a variety of helpful tasks, including subtitling, translation, and captioning. Simon Says Assemble takes this game changer to it‚Äôs next logical progression: single-track editing.

And don‚Äôt just think of this as one person sharing media. Imagine you‚Äôve shot a dozen interviews and only have a few hours to sort through that media. With Simon Says Assemble you can stack a team of producers, editors, assistants, and even that graphic designer who‚Äôs just sitting around waiting for his 4k comp to render. Teamwork in the truest sense.

‚ÄúBlessed are the flexible, for they shall not be bent out of shape.‚Äù

So let‚Äôs break down what this can do for you.

You‚Äôre not an editor, but because ‚ÄúMarketing‚Äù is in your title, it‚Äôs fallen to you to take a Zoom lecture from the CEO and cut it up into a series of more manageable bite-sized pieces to share on social media.

Start an email to your media guy, ‚ÄúHey Chad, got a fun project for you! Got some time to tackle this for me?‚Äù

Chad‚Äôs response is less than thrilled. ‚ÄúI can only give you an hour of time tomorrow, but if you build them all here in Assemble, I‚Äôll clean them up for you‚Äù

Assemble, huh? Fine, you‚Äôll do it yourself.

So you import your Zoom video, let it transcribe away, and start sifting through and highlighting the soundbites.

Export as XML to‚Ä¶ what does your guy use to edit? Final Cut? You‚Äôll find out later. The important thing is to get each one built.

Next video, done. Before you know it, you have all twelve built out.

Grab a share link to send your Assemble project to Chad. He can download whatever XML format he needs.

Send original video to Chad. That‚Äôs it. He‚Äôll do the rest.

Wait‚Ä¶ that was it? You did all the assembly cuts on your own, without ever having to download anything or fire up a YouTube tutorial and listen to some guy talk about all the extra content you can get with Patreon.So just remember, FCCFCSTCV. Easy.

I had a project a few years back that involved making tourism videos for several cities. The agency representing us had a hard time selling our budget to the tourism board, so they sweetened the pot with extra deliverables. Happens all the time.

Except those ‚Äúextra deliverables‚Äù were 36 interview videos, each with their own unique broll, unique music, and unique stakeholders. And I found out the week before post started. This is how it played out on my end:

#3: Console agency producer with motivational ‚Äúyou can do it‚Äù speech

#4: Deliver paper cuts to a team of assistant editors

#8: Receive audio lock from client and send to stakeholder (the interviewee) for approval

#10: Receive story lock from stakeholder, but now client has a change.

#11: Ponder the choices in my life that have led me here.

If I had Simon Says Assemble, this project would‚Äôve likely come in under budget.

#1: Run all 36 interviews through Simon Says Transcription, which is then available to Simon Says Assemble

#2: Share all Assemble projects with Producer for initial papercut inside the app.

#3: Share the Simon Says Assemble project with the client and each relevant stakeholder

#4: Let that bag of cats simmer until done, release finalized papercuts of all 36 interviews to editor as they‚Äôre completed.

#5: Rough cut with music and broll.

#6: Receive notes from client and stakeholder

#7: Send to mix and color, going home to a happy wife and a happy life.

MY HEART HAS AN ASSEMBLE-SHAPED HOLE

Story, as we all know, is king, and producers are often the stewards of that story, maintaining the narrative as the custody of media changes through multiple hands. However, when challenges arise, the story is usually the first thing to get passed off to the next guy, and for good reason. As soon as the media is committed to a camera card, it falls to the king of that file-based realm to facilitate any and all changes. Simon Says Assemble gives producers and editors the ability to offload the story decisions to virtually anyone else. Seriously consider the last time any industry had that big of a shake-up, blurring the lines between professional and creative, and you‚Äôll understand when I say something big is on the horizon.