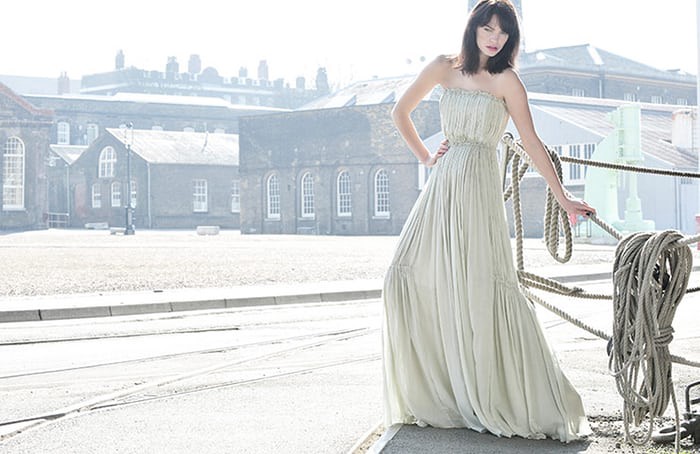 Diaphanous: A Fashion Term That Continues to Outlast Every Trend

Venus was a Roman goddess, akin to Greek mythology's Aphrodite, who represented love, beauty, fertility, and sex. There are countless statues and paintings depicting her likeness, most notably Sandro Botticelli's "The Birth of Venus". In these statues and paintings, she appeared "naked or with diaphanous drapes", as noted by writer Bettany Hughes. What little clothing Venus wore accented the work without distracting from her essence. This was the focus of diaphanous clothing early on and not much has changed in the centuries since.

Merriam-Webster defines diaphanous as "characterized by such fineness of texture as to permit seeing through", "characterized by extreme delicacy of form", and "insubstantial, vague". However, it's the first meaning that still sticks today.

Diaphanous first appeared in the 1610s. It was derived from the Greek word diaphanes. The prefix dia- means "through", and ÔøΩ ÔøΩphanous means "to show or to make visible". Thus, diaphanous translates directly as "to show through".

In literature, diaphanous offered an elegant way to vividly illustrate characters. Revered British poet Edward Lear described a stuffed rhinoceros as a "diaphanous doorscraper". In Act 2 of the classic ballet La Sylphide, Madge retrieves a diaphanous magic scarf from a cauldron. But it was the fashion industry itself that truly embraced the word.

The first bra was invented in 1914, as a layering piece for diaphanous gowns. Diaphanous florals and silks were the definitive spring looks in 1997, when design houses like Dolce & Gabbana, Nicole Miller, and Versace embraced all things sheer. Three years later, actress and entertainer Jennifer Lopez brought the term to the mainstream. "Jen Lo made Donatella Versace's diaphanous green fabric a national call to arms," wrote one Vibe magazine critic. Perhaps this was the word's peak of popularity.

But fashion's love affair with sheer fabrics is still just as intense. Kitchen design company Brizo enlisted designer Jason Wu to craft a line of luxurious and diaphanous gowns, which were photographed alongside sleek faucets and kitchen gadgetry. Echoing 1997, diaphanous dresses became a top seasonal trend once again in 2011. And in October, in a piece highlighting Christian Dior's first-ever female artistic director Maria Grazia Chiuri, Glamour magazine revisited the luxury label's legacy of "the diaphanous and the dainty".

One might wonder why diaphanous has only been applied to fashion when it has multiple meanings. The other definitions speak to sudden realizations or discoveries, but there's another word, with similar Greek beginnings, that many consider more suitable. Epiphany, which means "a usually sudden manifestation or perception of the essential nature or meaning of something", breaks down to epi-, or "on, to, upon", and ÔøΩ ÔøΩphany, "to show". Think of its meaning as "being revealed when one is upon something". It could easily translate to diaphanous' direct translation, "to show through", but history has dictated another path.

Perhaps fashion's prevalent use of diaphanous, and the word's timeless meaning, have allowed it to avoid the fate of other older English words, as well as older styles. Despite the fickle nature of the industry it's tied to, diaphanous continues to outlast the trends.