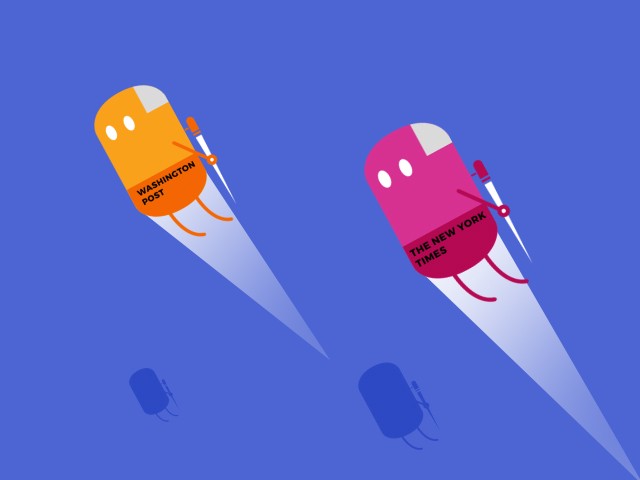 In the first part of our journalist series, we introduced you to Gabe Fleischer, a 15-year-old writer whose objective political newsletter is changing the way thousands of Americans read the news. In the second part, we explored how reporters are using social media to source and investigate breaking news stories. Now, in the third and final installment, we'll discuss how bots are, quite literally, changing the faces of those who report the news.

We interact with bots in various parts of our online activity. When you head online to report an issue with a clothing item you bought, it's likely your first point of contact is with a chatbot instead of an actual customer service representative. Every time you ask Siri to add an appointment to your calendar, you're conversing with a bot. And now, it seems bots are becoming major participants in the 24-hour news cycle.

Bots are essentially computer programs using decision trees to handle everyday, real-world problems. From saving money to setting reminders, they automate parts of our lives and businesses and save us time. The e-commerce, banking, and education industries were quick to adapt bots into their business practices. But now, the news industry is using them to keep the public up to speed on the latest headlines.

Twitter is perhaps the most common place to encounter journalism bots. @RealPressSecBot copies and pastes each of Donald Trump's tweets onto documents containing official White House letterhead and then tweets them. @LAQuakeBot automatically tweets out all seismic activity detected in the greater Los Angeles area. But other social media networks are following suit. Facebook launched a news bot, along with a series of other bots, in April of this year.

But not to be outdone by social media platforms, some of the country's most established publications are taking new approaches to using bots to report the news.

In February, the Washington Post debuted Heliograf, an AI-powered, content-generating system designed to expand the paper's online readership with automated stories. First, editors create a series of templates for specific subjects. These templates include phrasing that applies to multiple outcomes within that subject matter. Let's say they're building templates for Black Friday. They'd include phrases like "sales were up compared to last year", "sales were down compared to last year", and "record number of shoppers". Heliograf then connects to a structured data source and essentially fills in the blanks. The software then alerts editors about any disparities via Slack. Thus, Heliograf allows WaPo to cover every story without overloading every reporter.

The New York Times has also experimented with bot technology. During the Rio Olympics, the publication enlisted reporter Sam Manchester to construct a series of automated tweets about his observations during the games. Readers who texted NYT Sam received his texts. Though it wasn't a bot per se, the automation aspect created the same effect. Manchester constructed 70 messages and received more than 30,000 texts. The feature was a hit, but he could only answer 1,300 of the messages; a bot would've answered all 30,000.

To best their Rio Olympics experiment, NYT worked with reporter Nick Confessore to craft daily political updates during the 2016 presidential campaign season. Confessore scripted out conversations beforehand so that everyone received a response. Roughly 250,000 people used this bot and had some form of what they believed was a personal experience.

So, what does this mean? Will bots replace journalists? How will we verify the accuracy of the stories we're receiving and who will we hold accountable? If publications must hire people to vet the bots' stories, wouldn't it just make sense to have them conceive, research, and write the stories to begin with? The answers aren't plain and simple; the future of bots in news remains unseen. Of course, accuracy is a concern, especially when bots are used for unscrupulous tasks or projects. Bloomberg recently dissected the many ways Twitter bots are used to spread fake news or disparaging messages.

But based on the experiments conducted by WaPo and NYT, and bots' popularity on Twitter, the positive impact is twofold. First, publishers with tight budgets and smaller newsrooms are looking for ways to cover all news in the most efficient way possible. If a bot can "cover" a small story about a 1.5-magnitude earthquake, then a journalist can head out to report on a political rally or a fire. It's a way to expand their reach and scale without overextending their teams. And second, as social media users and readers look for more personalized online experiences, bots give them the sense that the news is tailored to their tastes. They receive just the targeted highlights, a few morsels, and they can choose whether to read further. But there's still a place for investigative reporting, long-form journalism, and general human observation in the news.

Whether it's the use of bots, the popularity of a newsletter, or a lead discovered in a trending hashtag or YouTube video, it's clear that the journalism industry is changing, and faster than most news organizations can fathom.

Journalists, closely supported by technologists and technology, is the only way forward.