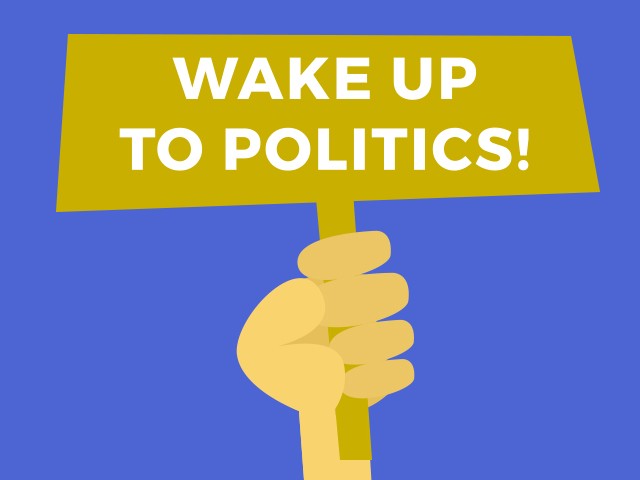 Wake Up To Politics: How a 15-year-old writer is changing the way we get political headlines | News

American journalists are currently navigating a major period of tumult. Major news networks and publications no longer control choke points of distribution and are no longer the public's only way of accessing reporting and breaking news. Many of the country's most established news sources have struggled to embrace technological advances and redefine their strategies for the current digital era. But a few journalists and publications are experimenting and finding traction with a passionate following. In our latest series, News in a New Age, we'll discuss three instances in which new media is reshaping the way we get our news.

Gabe Fleisher starts every newsletter the same way. "I'm Gabe Fleisher, reporting live from WUTP World HQ in my bedroom." It's a fairly casual way to start a newsletter, let alone one covering current affairs, but it's an intro befitting of its 15-year-old author. However, he doesn't muse about homework, celebrities, crushes, or any of the other stereotypical subjects that high schoolers would surely enjoy. Next, he gives the date and a countdown to both the 2018 midterm elections and the next presidential election. His newsletter, Wake Up To Politics, is a daily comprehensive recap of the latest developments in political news. With roughly 2,000 daily readers, WUTP may not be a direct competitor for the major news networks just yet. But the newsletter's power lies not in its subscriber numbers but in the names populating the list.

Some of Fleisher's fans include MSNBC anchor Steve Kornacki, Daily Show correspondent Roy Wood, Jr., and CBS News White House correspondent Major Garrett. And thanks to the high-profile subscriber list, a profile in the New York Times, and a feature on a recent episode of Full Frontal with Samantha Bee, Fleisher has amassed almost 20,000 Twitter followers. So, what's driving thousands of consumers to subscribe to a high school freshman's email newsletter? Objectivity.

Wake Up To Politics' mission is stated clearly on the homepage: "The daily goal for the last five years has been to inform readers with the most non-partisan and comprehensive yet understandable version of the news that really matters." The newsletter is packed full of facts.

A recent installment detailed the Supreme Court's decision to dismiss a challenge to Trump's travel ban, lawmakers' plan to introduce a bipartisan bump stocks bill, and developments in the Russia probe. Fleisher dives into the biggest political news stories of the day, which some could argue the selection of which is subjective and potentially partisan. Nevertheless, he seeks to avoid any partisan spin in his writing: the descriptions are concise, and the information is presented without opinion. No pundits, no pressure to decide if something is wrong or right, and no speculation about Trump's tweets or his next move. It's just the news.

And in a hyper emotional Washington, D.C., this may be exactly what some are looking for.

The young writer has produced Wake Up To Politics, in some form, since he was 8 years old. He first fell in love with politics when he attended President Barack Obama's first inauguration at age 7. After, he started reading books about presidential campaigns and visiting presidential libraries with his parents. He seeks to combine his passionate interest in politics with his mission to keep the public up to date so they can make informed decisions.

In an age where viral political news typically involves controversy and feuding pundits, Fleisher's approach might not seem like the most effective, or exciting, way to build a following. However, the increasingly blurred line between news and opinion makes his work even more important.

It may even be why his newsletter is growing in popularityÔøΩ the public's trust in traditional media is at an all-time low. According to a recent Gallup poll, only 24% of Americans have confidence in television news; 27% have confidence in newspapers. These are some of the lowest confidence numbers Gallup has reported since the 1980s.

One reason for the decline is perceived bias. For example, a 2016 study from the Harvard Kennedy School's Shorenstein Center on Media, Politics and Public Policy found that TV election coverage was skewed in favor of President Donald Trump because of journalistic bias. That journalistic bias wasn't based on reporters' personal beliefs but on their desire to boost ratings and a perspective that the novelty of Trump's narrative was more compelling to viewers than the narratives of established politicians like Hillary Clinton and Bernie Sanders. Yet still, this bias led to Trump occupying more airtime than his rivals. Also, many networks are perceived to take more of a liberal or conservative point of view. However, Fleisher's perceived neutral stance offers an alternativeÔøΩ one that not only challenges traditional news' current POV but also the mediums they use to reach Americans.

Wake Up To Politics is an independently produced newsletter that's authored by one writer, directly to his followers, and that requires little more than an internet connection and passion to produce. And this combination of deep interest and ambition has now attracted the attention of some of the country's most visible news correspondents. While it's most certainly impressive that Fleisher has accomplished this by the age of 15, what's even more intriguing are the questions this raises about the future of journalism.

Is reporting democratized in the age of the Internet, and maybe even commoditized? Will the news become fragmented and with much smaller and more niche audiences? In a digital age with an abundance of information, do we consumers regress to smaller circles in which we have a personalized relationship with the writer or team of writers?

The answers remain to be seen. But in the meantime, it seems WUTP has opened a window into the many possibilities and Fleisher is offering hope that the public's faith can be restored in the newsÔøΩ just in a new format.

Next up, we'll explore the ways investigative reporters are using social media to find tips and break big stories before the competition.